MEETING WITH AN ARTIST (EPISODE 2). Meeting with Anne-Caroline Ayot, make-up artist by day, illustrator by night

Luxus Plus Magazine continues its series on the great collaborations in the history of fashion and luxury. Today, we take a closer look at the most prolific brand in terms of collaborations: Supreme. Or how, for almost 20 years now, we have been witnessing what in Novlanguage would be called a phenomenon of intensive “supremization” of the sector.

Would you like to take a look at Supreme again? It must be said that since the early 2000s, it has been difficult to escape the buzz around the brand. Not a season goes by without a new collaboration project being announced, with marketing campaigns, celebrity endorsements and influencers. The good thing about Supreme is that there’s something for everyone, good or bad, because you have to be a big fan of logomania anyway. But of course for all purses on the other hand.

Supreme is THE streetwear brand created in 1994 by James Jebbia at the corner of Lafayette Street and Prince Street in New York. Its undeniable strength is to know how to create desire through lack. The brand works intensely in the niche of scarcity. As the New York Times points out: “With Supreme, you have to earn the right to buy”. Having access to products is often a struggle. You have to put on your sneakers (Nike, of course, with whom Supreme first collaborated in 2002), stand in line for hours and have the patience to be part of the Happy Few, which will feature a brand product with the red box logo that is so recognizable today and whose typography is inspired by the artist Barbara Kruger. And above all, so sought-after that the black market is full of offers at exorbitant prices. 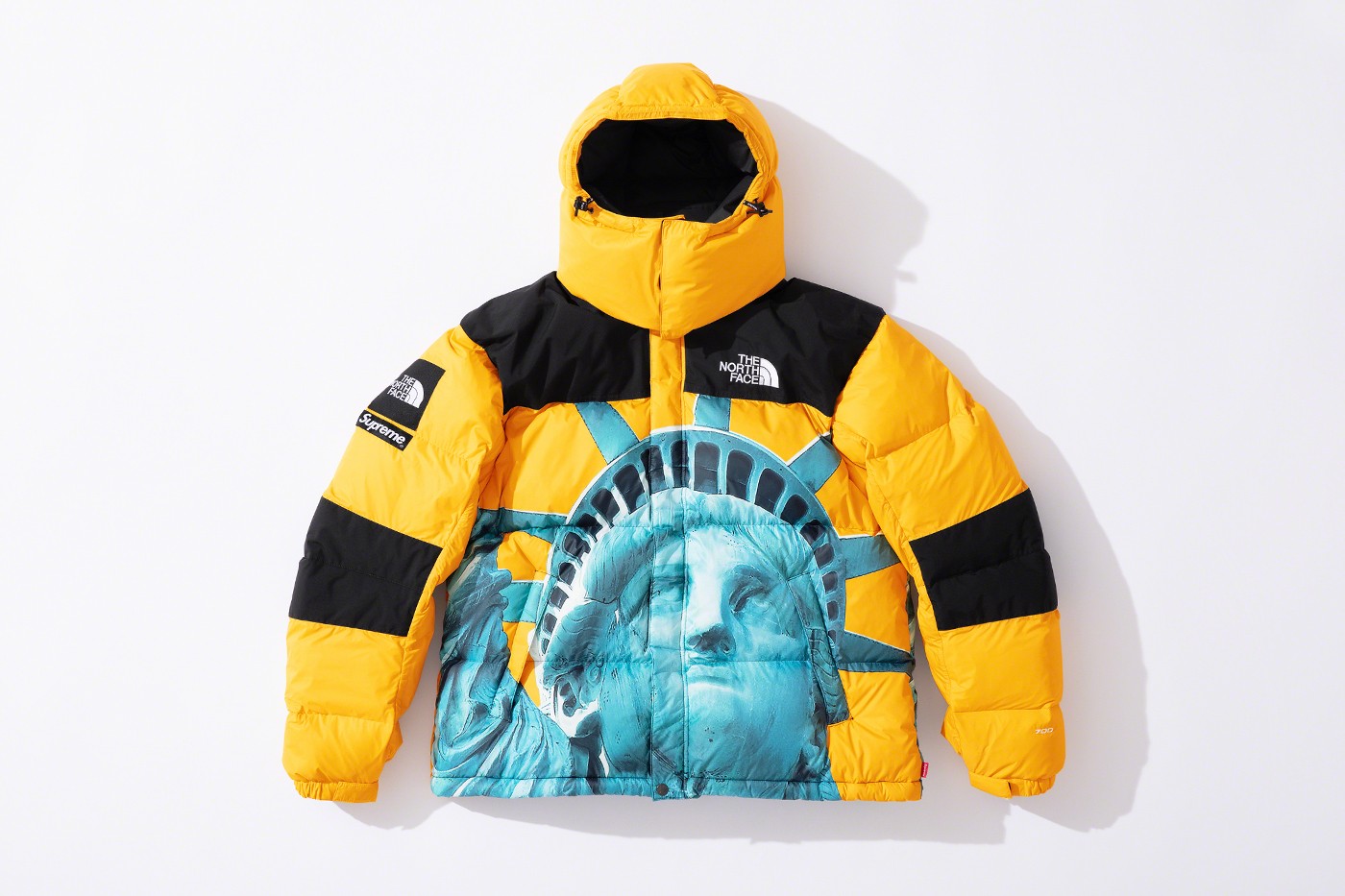 We will underline here the dichotomy for Supreme to be a brand whose initial mission is to promote New York’s downtown and skate culture (thus a street culture which by definition is democratic), and to finally find itself almost inaccessible to the greatest number. James Jebbia appropriated the codes of luxury and quickly understood the interest for his brand to take the step of luxification: collections available in limited quantities, a selectivity of clients, association with celebrities, and then very quickly media collaborations with highly desirable brands.

Let’s take a look back. In 1994, Supreme is a line of durable chinos, thick tee-shirts and hoodies made in Canada for skateboarders looking for quality products. A strong anchor in the urban culture. This urban culture, it has its own codes and its own identity: rebellion, independence, expression, diversity, creativity, sharing, mixing, counter-current are all key words that describe it. It is also in this community of urban culture that hip-hop, rap, graffiti and free style have found their anchorage. Not very Louis Vuitton, is it? And yet… 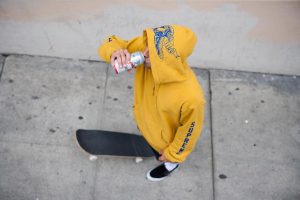 Undeniably, the collaboration with Louis Vuitton in 2017 is the one that will have the greatest impact on people’s minds. Kim Jones came up with the idea for a capsule collection with the New York streetwear brand. The result: around fifty pieces, including t-shirts, hoodies, jeans, overalls, but also several accessories like bags, pouches, scarves, or sunglasses, gloves and key chains. An ode to the all-over logo, as the two brands associate their respective visual identities, both based on monograms and logotypes. From street culture to street couture, it’s only a step… 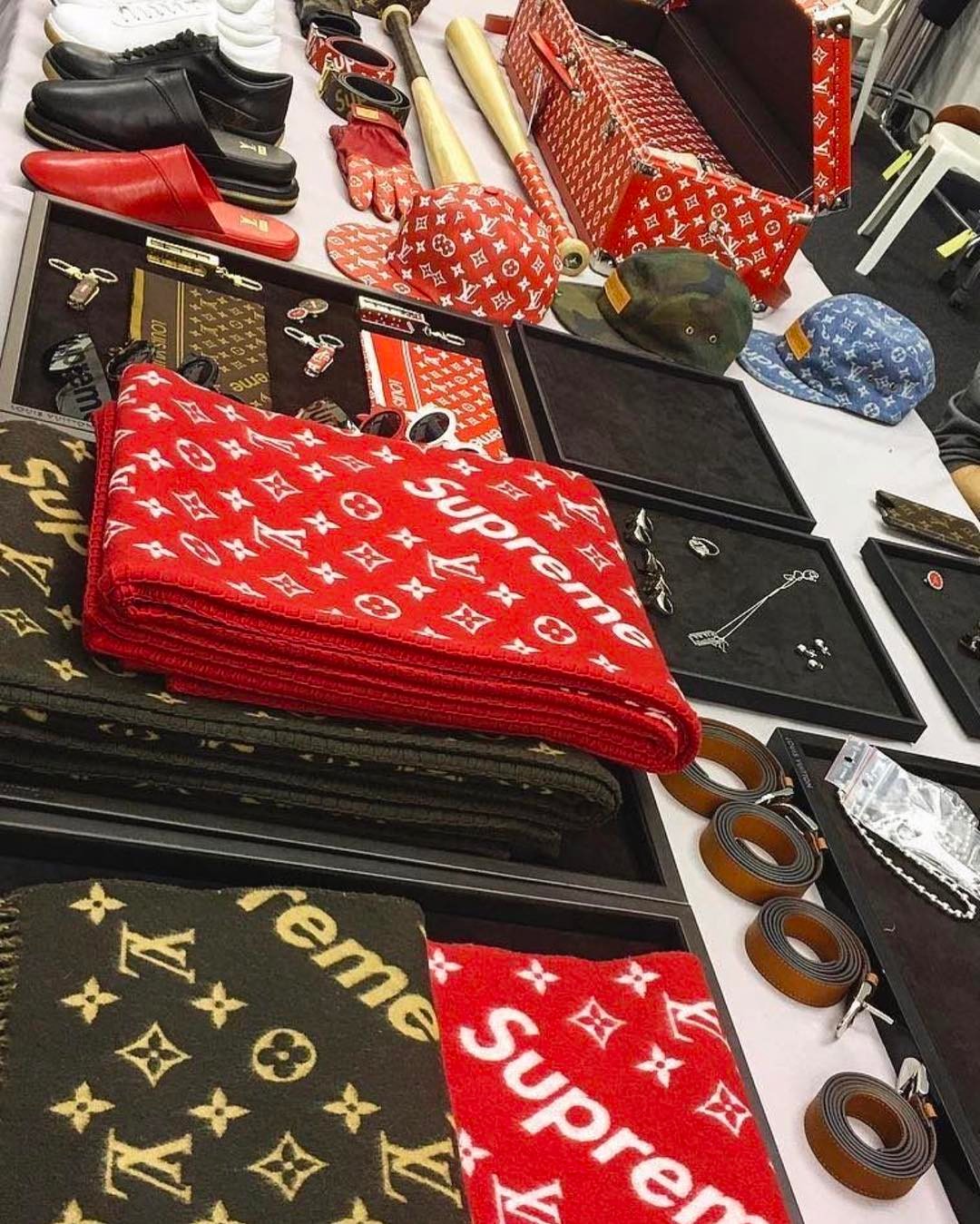 We’ve already seen it in previous episodes: luxury brands like Louis Vuitton like to slum it to look more hype and seduce cool kids. The reader will forgive us for these anglicisms, which only serve to illustrate the extent to which the luxury sector is desperately trying to attract a younger, less traditional, prescriptive target, by borrowing its codes and vocabulary. This is why associating with a brand that at first glance seems to be diametrically opposed on the fashion spectrum is a strategy that has become so widespread for the big houses.

Supreme gave Louis Vuitton significant legitimacy among the millenials. The incredible desirability generated by the joint collection in 2017 proved that the seam was juicy. Although controversial, as Louis Vuitton aficionados have seen red in history, the marketing operation was a dazzling success. That being said, Louis Vuitton is not a contradiction in terms, since the French luxury house went after the brand it had assigned in 2000 for hijacking their famous monogram on skates. It must be said that Supreme was not yet a global mass phenomenon at the time.

But let’s get back to the strategic end that is James Jebbia who, let’s mention in passing, won the Menswear Designer of the Year award at the CFDA Awards 2018, making Supreme the first streetwear brand to win the prize. To encourage emulation, the brand’s founder decided from the outset to produce in limited quantities and to operate the New York store on an exclusive basis. But limited quantities do not necessarily mean a rarefaction of the offer, since today, Supreme draws a weekly flock of everyday objects, sometimes incongruous, stamped with the brand’s logo, ranging from plates, balloons, water pistols, water bottles, to a pair of chopsticks or even inflatable canoes and kayaks.

Very quickly, Supreme has developed an exclusive image by multiplying collaborations with other brands as well as with contemporary artists (Jeff Koons, Damien Hirst, Richard Prince, Takashi Murakami…). James Jebbia understood the importance that these associations could have for Supreme, in a quest for disproportionate strength, even if it sometimes bordered on the too much. From the most obvious to the most unexpected, let’s review the most striking co-brandings of this millennium.

Supreme x Nike is THE brand’s collaboration with an almost annual collection since 2002. Most of Nike’s flagship models have been revisited by Supreme. In recent years, the two brands have not hesitated to have the products resulting from their collaboration endorsed by the Franco-British rapper Octavian. 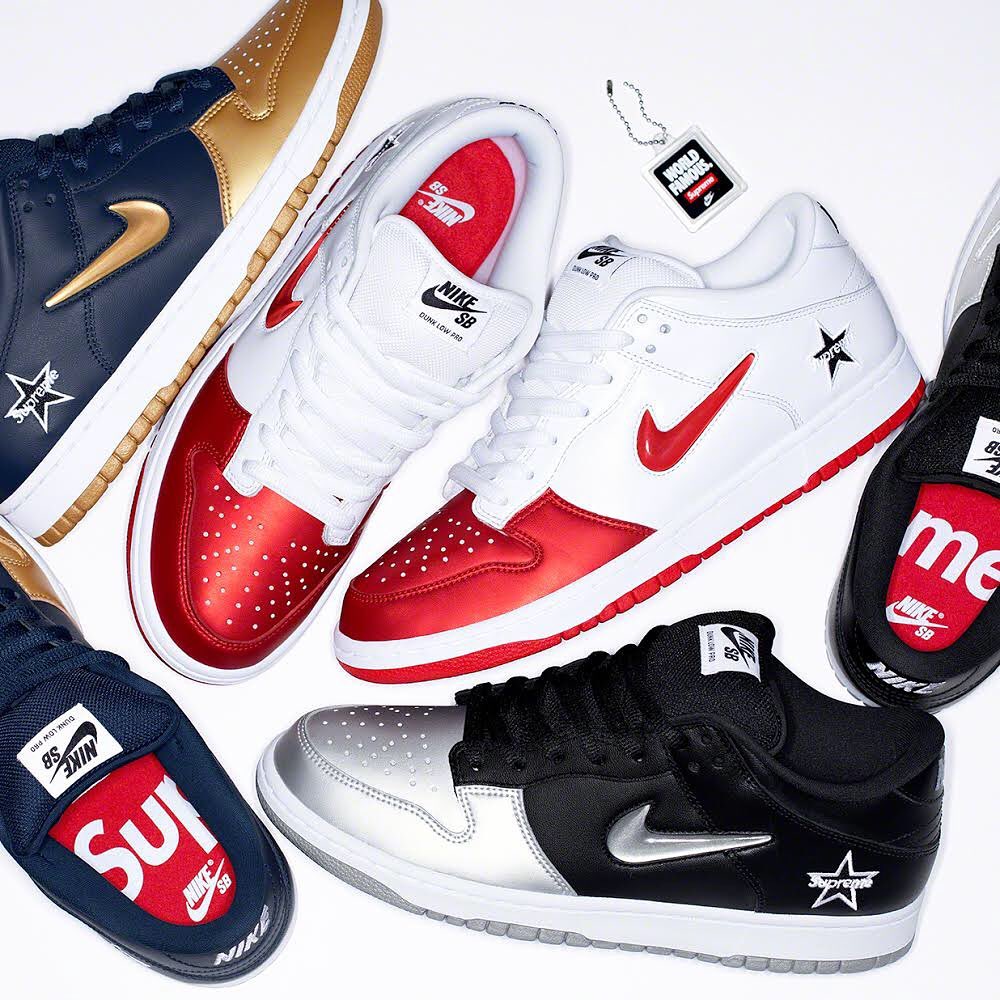 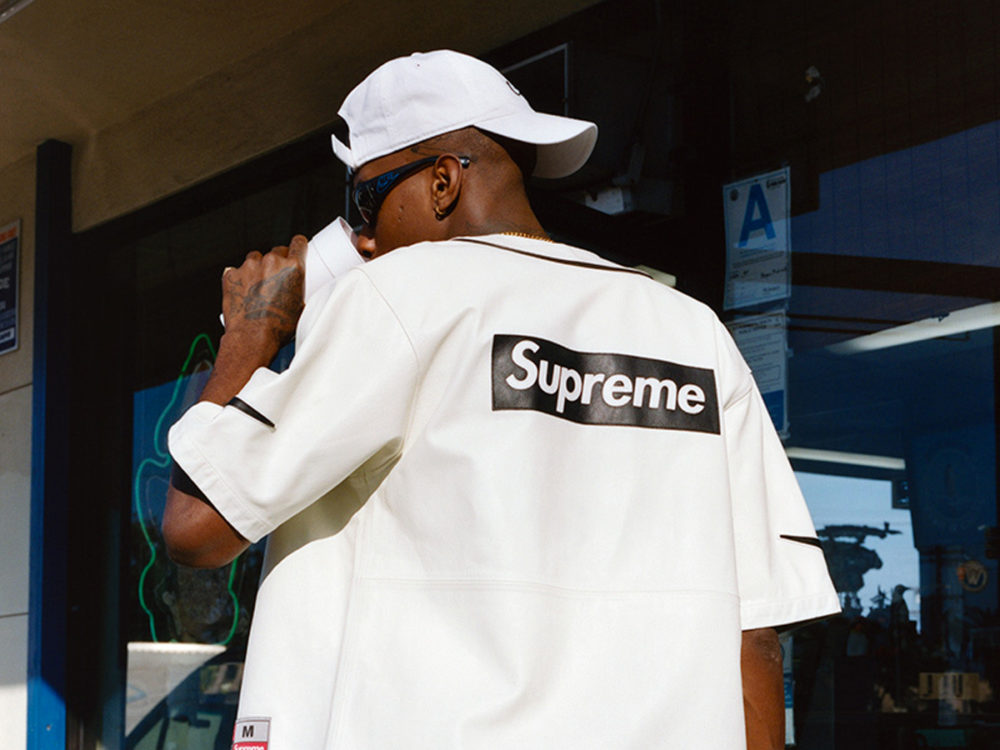 On the footwear side, Supreme’s collaborations with brands are numerous and regular: Vans, Clarks, Timberland or Doc Martens are among the most recurring. Here too, the iconic models of each brand are revisited with Supreme’s signature style. 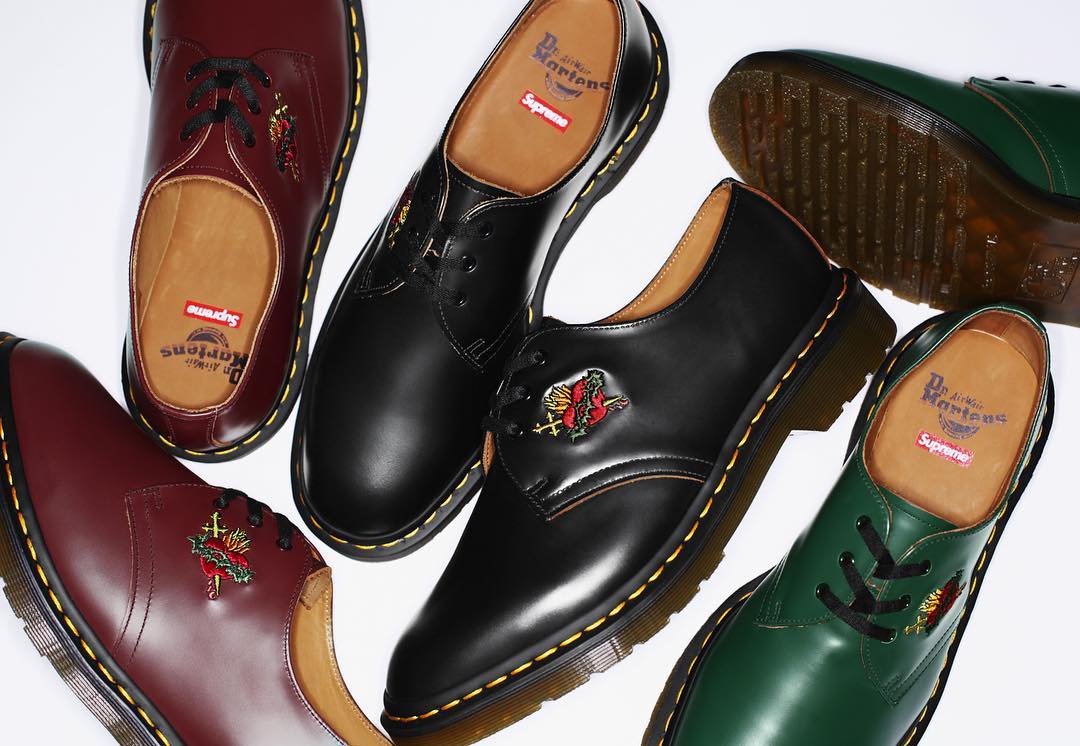 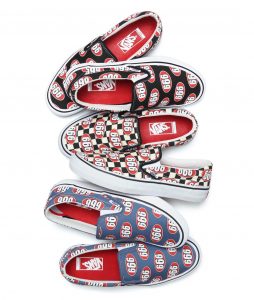 Faithful, Supreme is also faithful with The North Face. Launched in 2007, the very first collaboration between the two brands stemmed from James Jebbia’s desire to delve into the archives of The North Face to publish the brand’s flagship pieces, bringing back to life several forgotten product lines. 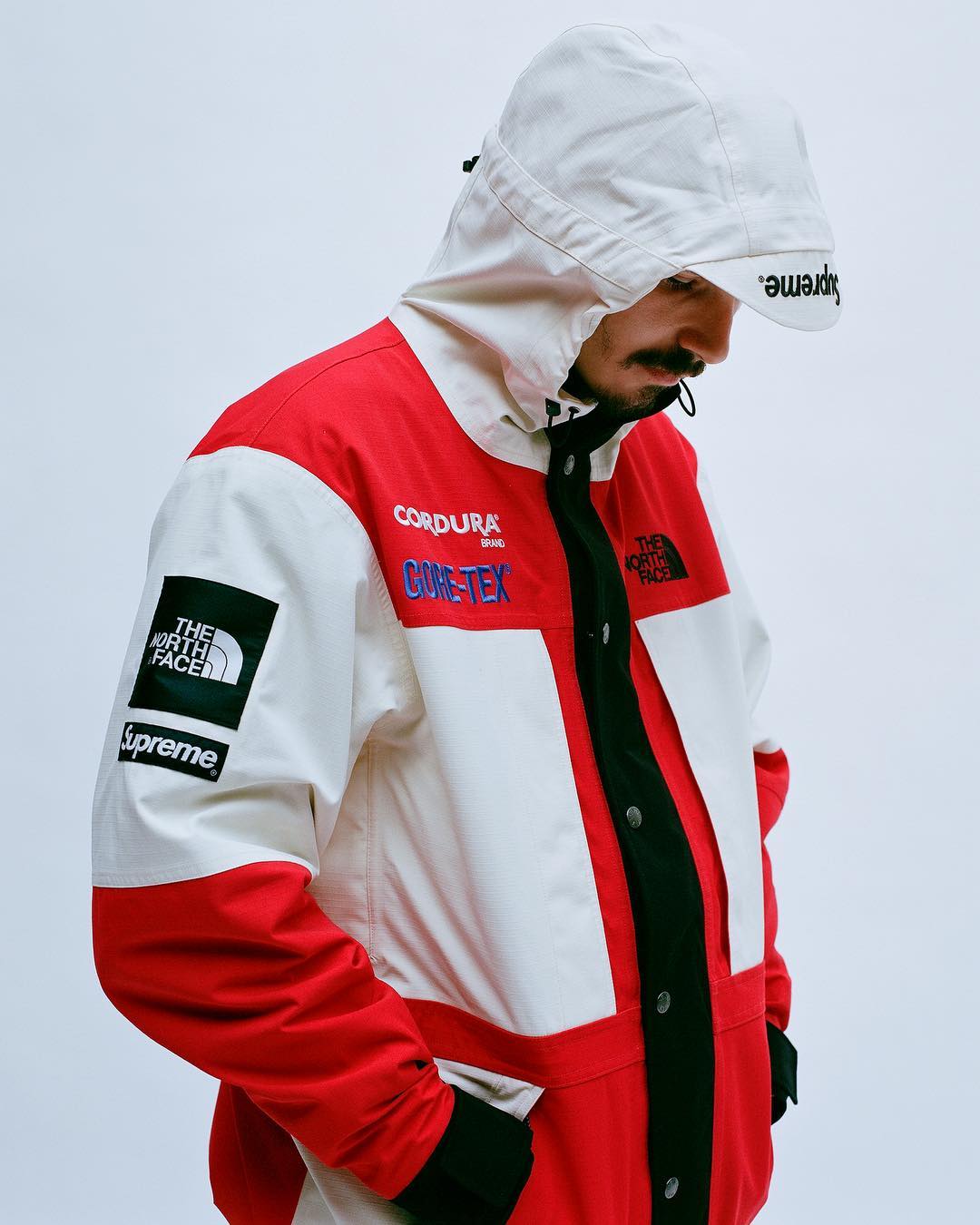 In 2012, Supreme partnered with Comme des Garçons for the very first time. The first collaboration featured hooded sweatshirts and polka-dot T-shirts with Supreme’s logo box in mirror, a set of striped oxford shirts with a red Supreme stripe and matching caps. This concept of mirroring and dividing the Supreme logo has since become a trademark of the collaboration, as have the polka dots, which are an integral part of the graphic language of Rei Kawakubo’s label. 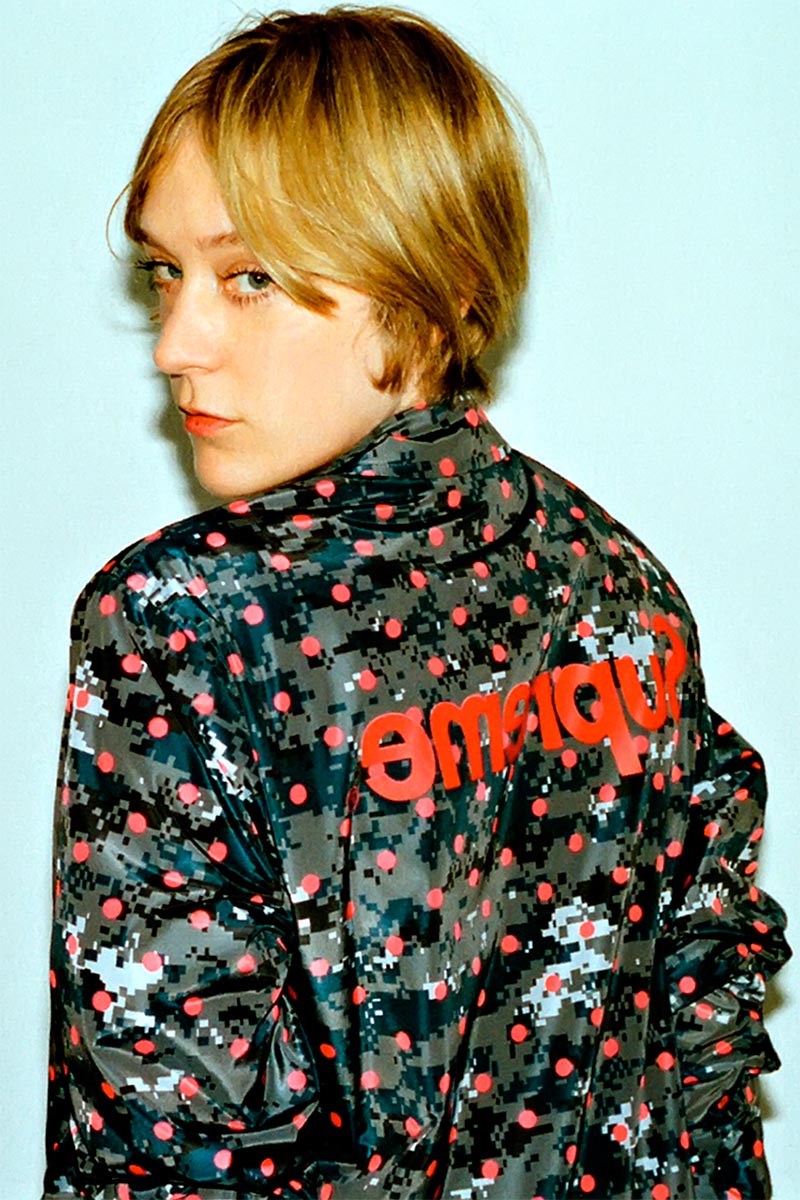 Supreme has also been collaborating annually with Lacoste since 2017, when the US streetwear brand infused its signature French crocodile label wardrobe with a series of 90’s-inflected tracksuits. Each time, the result is the same for the collection: immediately unveiled, immediately sold out. One more paradox when we know how much Lacoste has worked for years to virginize the brand that street kids had appropriated, to the great displeasure of the brand that wanted to move up-market and position itself more as a preppy than as a street…

In 2018, Supreme collaborated with Rimowa on custom aluminum versions of the brand’s Multiwheel Topas cases available in red and black. The success of this first collection, which sold out in just 16 seconds, motivated a second collaboration in 2019. 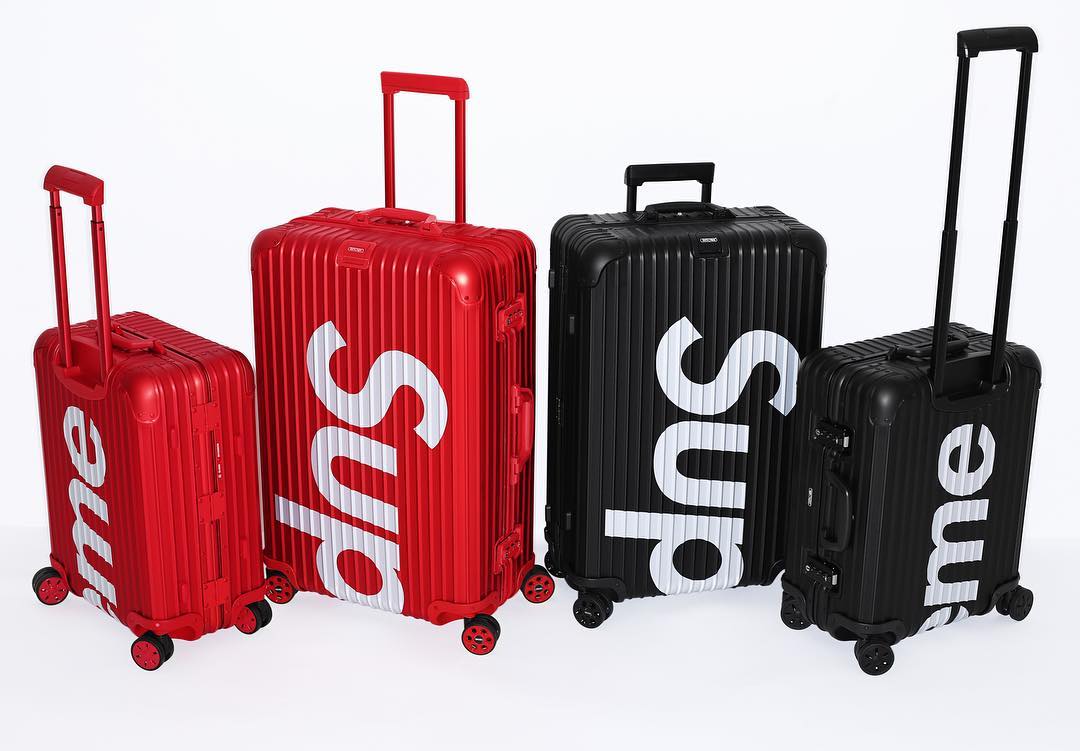 More surprisingly, in 2020, Supreme signed a collaboration with Oreo. Sold in limited editions exclusively in Supreme boutiques, these rare and unique red cakes have seen their prices skyrocket, reaching unimaginable amounts when resold on eBay. Offered for $500, the package quickly reached between $4,000 and $15,000… making it the most expensive cookie in the world. 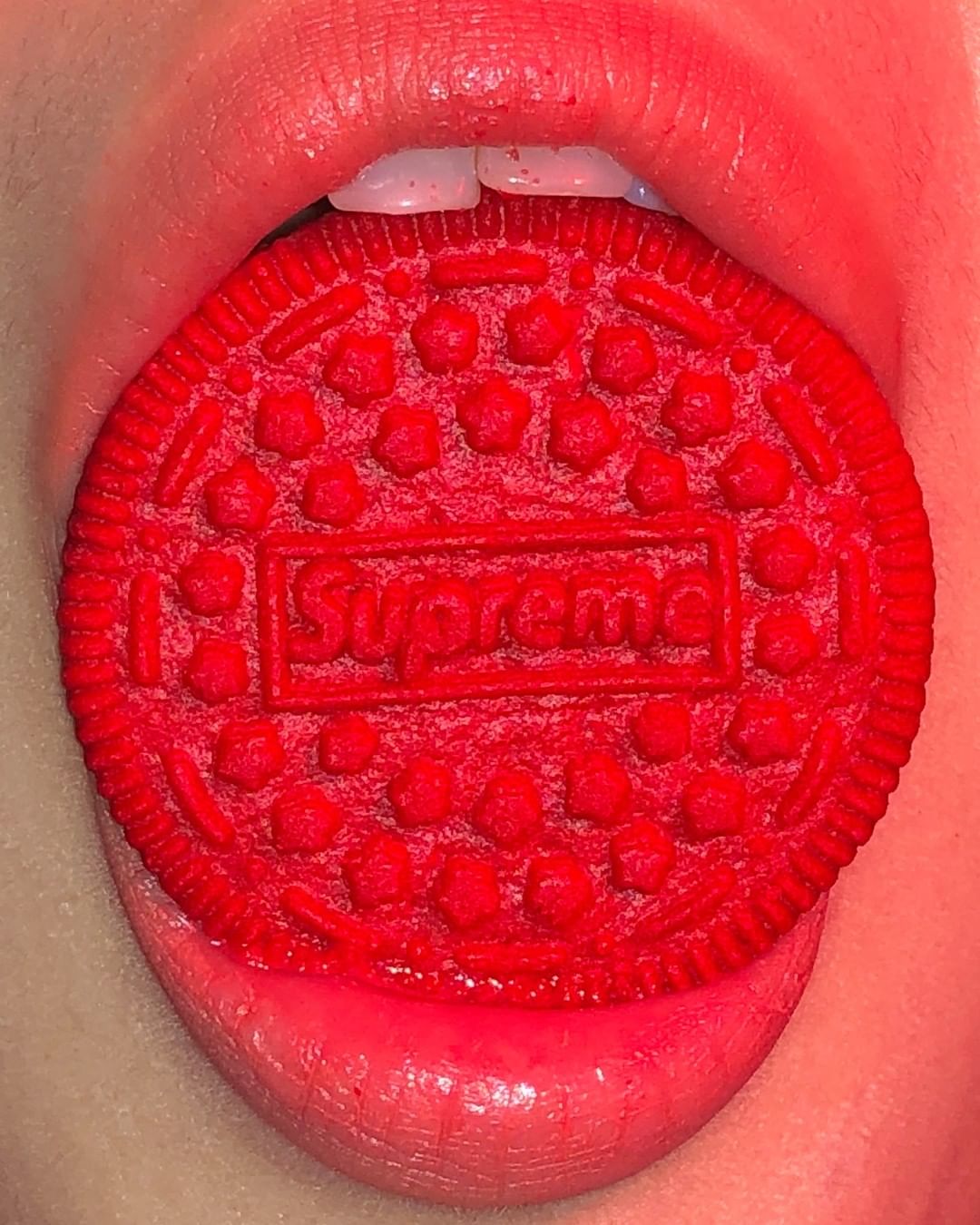 The latest collaboration to date, the Supreme x Les Schtroumpfs collection was released on October 3rd in all Supreme boutiques and on the Supreme website. The Belgian comic strip created in 1958 by Peyo has experienced a strong resurgence of interest in the United States thanks to the success of the feature film presented in 2011. 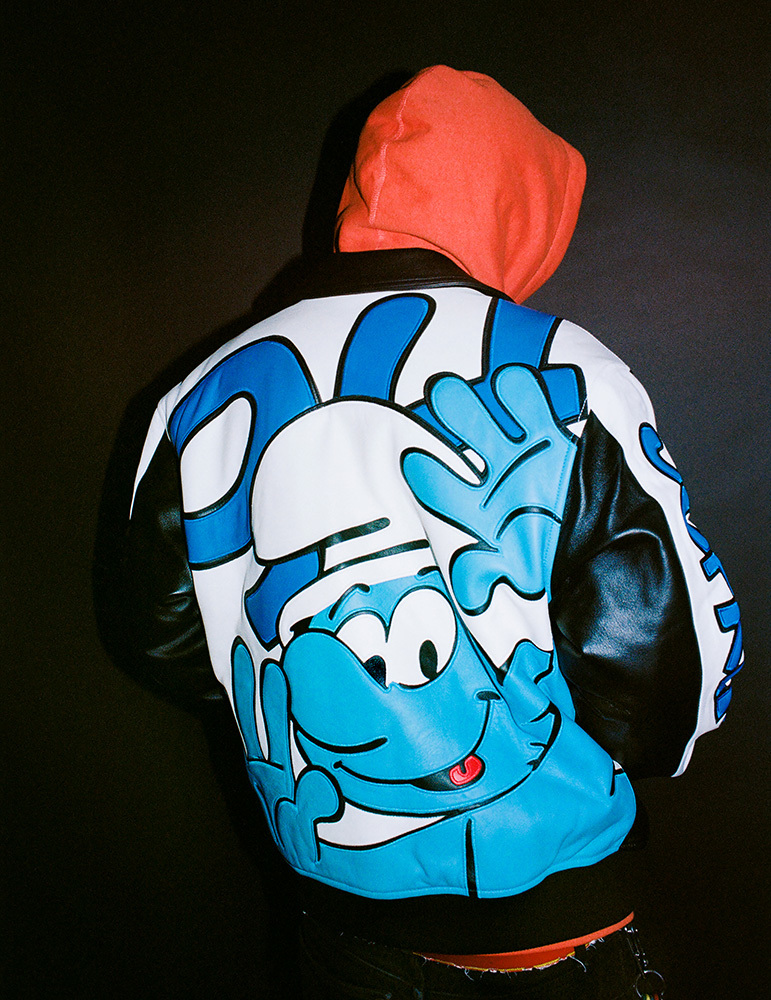 As you can see, Supreme acts like a magic wand on all the collaborations that the brand sets up. They are very numerous, prolific, and above all have become the guarantee of an almost arrogant success. Anything with the Supreme logo can be sold (and resold) in a few minutes. The US label allows a revival to the forgotten or fallen products of many brands. It lends an incredible aura of desirability to collections. It’s no wonder that many houses are knocking on Supreme’s door for partnerships. It is the guarantee of a highly bankable operation that also allows sometimes outdated brands to come back to fashion.

This is a real mass phenomenon, a shock wave that runs through the entire fashion and luxury goods industry and that doesn’t seem to be about to stop. One might have thought that the craze for Supreme would only last for a short time. But for the past 20 years, James Jebbia’s label has been at the forefront of the scene and infuses our daily lives as never before has a streetwear brand from street culture done so. Each new collection is awaited with a firm foot, countdown obliges, and turns into a real media and commercial tsunami. How can we not mention here the 2018 Supreme auction at Artcurial, which generated €850,681 for the 130 lots sold under the hammer of urban art specialist Arnaud Oliveux. That’s double the overall estimate.

The brand is as noisy as its creator is discreet, expressing itself little in the press. In his last interview, given in 2019 to Gentleman Quarter as part of the brand’s 25th anniversary, James Jebbia outlined his philosophy for the future of Supreme, in which the private equity group Carlyle (also a Moncler shareholder) took a 50% stake for $500 million in 2017: “We will do what we have always done. That is to say, try to be open, aware of what is happening, try to do the best possible things for young people while remaining true to ourselves. »

A brand therefore designed for young people, using the term “young people”, but obviously not for all young people, because it is becoming difficult to consider Supreme as an inclusive label, as the financial factor is becoming a predominant variable today in the marketing of the brand.

Finally, isn’t the real question whether it is luxury that is “supremising” itself or whether it is street culture that is luxuriating? The debate is open.

Lire aussi > THE GREAT COLLABORATIONS IN THE HISTORY OF FASHION AND LUXURY (EPISODE 3): VIRGIL ABLOH, THE CO-BRANDING SUPERSTAR 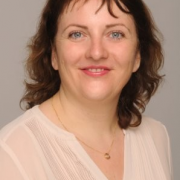 Fashion: These exclusive collections in the name of solidarity

The most prestigious hotels in Tel Aviv

Camille Fournet Paris: a progressive and modern vision at the service of art

MEETING WITH AN ARTIST (EPISODE 2). Meeting with Anne-Caroline Ayot, make-up artist by day, illustrator by night

Fashion: These exclusive collections in the name of solidarity