According to the French National Leather Council (CNC), French tanneries and mega-factories have seen their exports fall by 12% to 295.9 million euros in 2019. Imports remained stable at 482.4 million euros, with Italy representing the main player in this international competition.

Transalpine neighbours who are also France’s leading customers in this area, but whose orders have collapsed in 2019 by 21%, a figure that has increased since the start of the health crisis. The French tannery and mega tannery industry is currently made up of 45 industrial companies (and 10 merchant brokers), compared to 1,300 in the 1960s. It is in the name of these semi-artisanal companies that work, produce on French territory, and also act in favour of sustainable luxury, that we met Jérôme Verdier, president of the tannery and megisserie federation.

What are the difficulties encountered today by the tannery-mégissiers, these professionals who operate upstream in the French leather industry?

First of all, I would like to point out that the voice commonly heard by French tanners-makers is that of a very small number of craftsmen who have survived a massive relocation that took place mainly between 1970 and 2010. And these craftsmen exercise a rare know-how for which they have been obliged to fully integrate the regulatory aspect of ecology which is very strict and constraining on our territory.

At present, many images from tanneries in Bangladesh or Pakistan are circulating of children with their legs submerged up to their knees in toxic chemical liquids to soak animal skins in huge drums filled with dangerous liquids. Unfortunately, there is a market – the fast fashion market – which offers to buy shoes at the price of 10 euros. But this world is far removed from that of our French craftsmen who are of particular interest to the world of luxury. This is why the French tannery-mégisserie is not at all concerned by accusations that leather is not environmentally friendly or would have a significant negative impact on the environment. These are media shortcuts. And this can simply be explained by a lack of knowledge of our business.

What are the main ecological constraints facing French tanneries and mills?

All French tanneries are required to be classified for environmental protection (ICPE), so we have a number of obligations concerning water, solvent and solid waste discharges…

For example, our craft and industrial sites, known as know-how sites, are served by the wastewater treatment plants of the major cities in which they are located, while atmospheric and water discharges are extremely controlled.

If you combine the regulations of the Industries Classified for Environmental Protection that have existed in France since the 1970s, and have been constantly strengthened and improved since then, with safety at work governed by French legislation, you obtain a balance that our companies need to operate in an ecological and sustainable manner. In France, our tannery-mégisseries are therefore already very much aware of the protection of the environment and of people at work.

But beyond the regulatory obligations of our country, some international labels that have emerged such as LWG (Leather Working Group) for example, have become very “trendy”. These labels will certainly apply very effectively to fast fashion suppliers. On the other hand, since tanneries that have managed to survive in France are already highly regulated, they do not need this type of label to guarantee their sustainable and ecological practices.

Beyond the ecological principles of the sector, what are the other priorities of the French tannery-mégisserie?

All ecological and sustainable issues are central. A few years ago, we had to prove that we didn’t pollute in order to survive. More recently, we have had to work on the safety of our products, that is to say the formulation of our products so that they no longer have any impact on health. Generally speaking, the quality of European leathers is exceptional. Because there is a legislative framework called REACH, in force since 2007, aimed at “making the manufacture and use of chemical substances in European industry safer”, for the entire chemical industry in the area, including tanneries. The issue at stake: the controlled use of formaldehydes, lead, pigments… This innocuousness today is reflected in the quality of European leathers which created great export demand.

After ecology, and more recently product safety, traceability and the origin of the hides, animal welfare has become the priority for the entire French leather industry.

What are the industry’s latest advances in terms of traceability and animal welfare?

Concerning traceability, for example, France has exceptional tools at its disposal, starting with the laser marking of hides and skins as soon as they leave the slaughterhouse. This marking remains legible after their chemical and mechanical treatment. This is despite the fact that the installation of laser beam machines in all slaughterhouses represents a major investment and that small slaughterhouses sometimes find it more difficult to invest.

Tomorrow, thanks to research carried out in France by the CTC (Conseil Technique du Cuir), the blockchain will therefore make it possible to record secure and complete information on the origin of eco-friendly leather. And through traceability, we will be able to ensure animal welfare.

It should also be remembered that all skins of species classified as endangered or vulnerable by CITES (Convention on International Trade in Endangered Species) are obtained at the same time as a certificate attesting to their legal origin to ensure that our activity does not harm endangered species.

In parallel to your mission at the head of the French tannery and megisserie sector, you are also the manager of the Alran megisserie located in Mazamet in the Tarn. What are its values?

Yes, I run a small artisanal SME of 25 people, specialising in the art of goat, calf and buffalo leather. The values we convey are those of craftsmen who work leather manually. We have a relationship with the skin which is that of professionals who give an important part of humanity to their work. We have as much philosophy and respect for people as if we were working with a very special and noble material. It is very special. 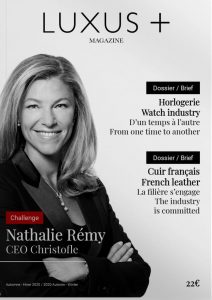 FIND THIS INTERVIEW IN THE FALL-WINTER 2020-21 ISSUE OF LUXUS+ MAGAZINE.

The artistic director in fashion: a profession in full mutation (Part 1)