The Blancpain watchmaking company is reinterpreting its famous diving watch from the 1960s, the Fifty Fathoms, which was already involved in the fight against radioactivity at the time.

The Fifty Fathoms timepiece is one of those historical watches, recognizable at first glance, and heavy with symbolism. Indeed, this iconic diver’s watch has been given a new lease on life, in a model even more recognizable than the first. This model is revisited by Blancpain in 2021 and entitled “Tribute to Fifty Fathoms No Rad“.

The new Blancpain watch features a yellow and red disc on its dial, symbolizing radioactivity discovered in part by Henri Becquerel in 1896, and then further developed by Pierre and Marie Curie in 1898, with the discovery of two as yet unknown radioactive elements, polonium, and radium. It was Marie Curie who gave a name to this physical phenomenon: radioactivity, a name derived from the Latin word radius, meaning ray. Its symbol, recognizable among thousands, is crossed out with a black cross and bears the inscription “No radiations“.

To understand the history of this model, we must go back to the beginnings of the original model, unveiled 70 years earlier. The fascinating story of the Blancpain Fifty Fathoms begins in the early 1950s. The world was slowly healing from the wounds of World War II, and waterproof, underwater pressure-resistant watches were very rare at the time and were reserved for military use.

However, in this post-war climate, people are looking for new discoveries and new horizons, favoring the emergence of a new sport: recreational diving. The only diving equipment available at the time dates back to 1930, and is not adapted to the public access to this new sport.

Jean-Jacques Fiechter, General Manager of Blancpain, intervened. He himself was very interested in scuba diving, but he could not find any watch adapted to the practice of this sport. He set himself the challenge of designing a waterproof watch that could withstand the pressure of the deep sea, with an easy-to-use rotating bezel. Blancpain‘s CEO wanted a bi-directional bezel with a locking system to prevent accidental disruption.

To avoid the risk of water infiltration in the crown, Jean-Jacques Fiechter uses a double O-ring seal and registers the patent. Because of the frequent manipulations that the waterproofing system of the crown, patented by Blancpain, imposes, he opts for an automatic movement. Finally, he added a double anti-magnetic back to reinforce the reliability of the model, as well as a luminous triangle to ensure visibility in the dark depths of the oceans. With a sober choice of the dial and a bracelet made of woven nylon and “tropic” plastic, the Fifty Fathoms was born. 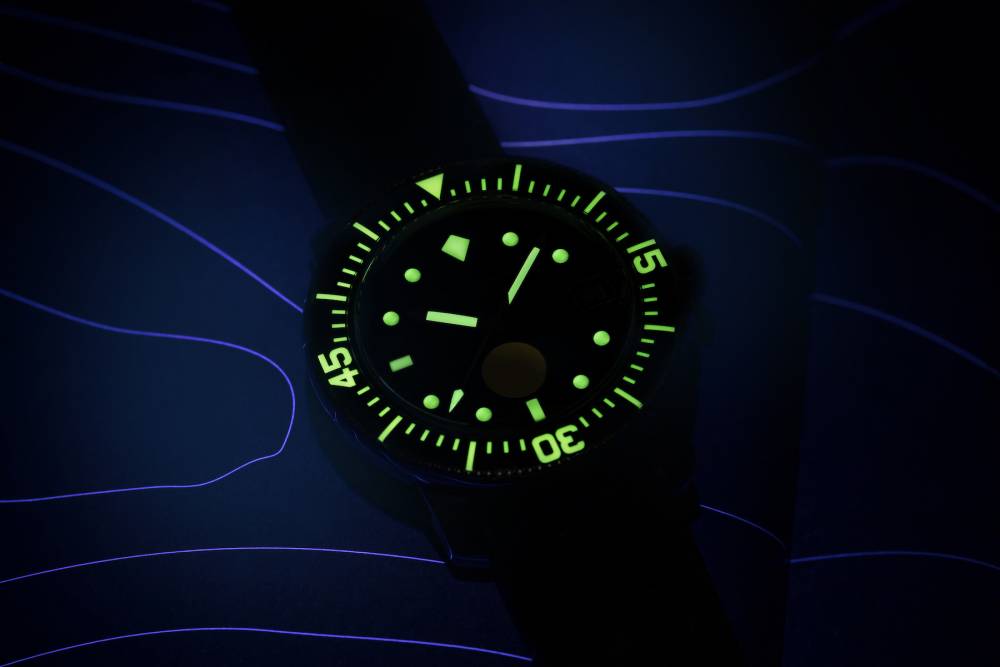 Named the Fifty Fathoms because it was water-resistant to 50 fathoms (91 meters), Blancpain‘s watch appealed to Robert Maloubier, a captain in the French Navy, who was tasked with finding a watch suitable for his crew’s future underwater missions. The officer met with Jean-Jacques Fiechter at Blancpain in the Swiss town of Villeret and ordered 20 watches for testing. On July 27, 1953, the first Fifty Fathoms plunged into the waters of the Mediterranean and won over the entire French military staff. Several hundred were ordered, and many other nations’ navies were quick to equip themselves with the Fifty Fathoms.

But in 1960, the radioactive element discovered by Marie Curie, radium, was declared harmful to health. At the time, radium was widely used in the watchmaking industry, particularly for its luminescent properties. To warn his customers that his model had been made without radium, an element that was now prohibited, Jean-Jacques Fiechter decided to add the symbol of radioactivity and to cross it out with a black cross and the inscription “No radiations“.

This particular model, the Fifty Fathoms RPG 1, better known as the “BUND No Rad” equipped the German Navy’s diving division in the mid-1960s. Today, Blancpain pays tribute to this historic timepiece with its “Tribute to Fifty Fathoms No Rad” re-edition, which is available in 500 pieces only. The original matte black dial, adorned with its orange geometric shapes, oscillating between rounds, rectangles, and diamonds (at 12 o’clock), is back. The indexes, graduations, and hands are equipped with Super-LumiNova “old radium” technology, offering unerring visibility. The reissued model offers a balance between the original Fifty Fathoms style and more contemporary modifications, such as its domed profile and sapphire insert. 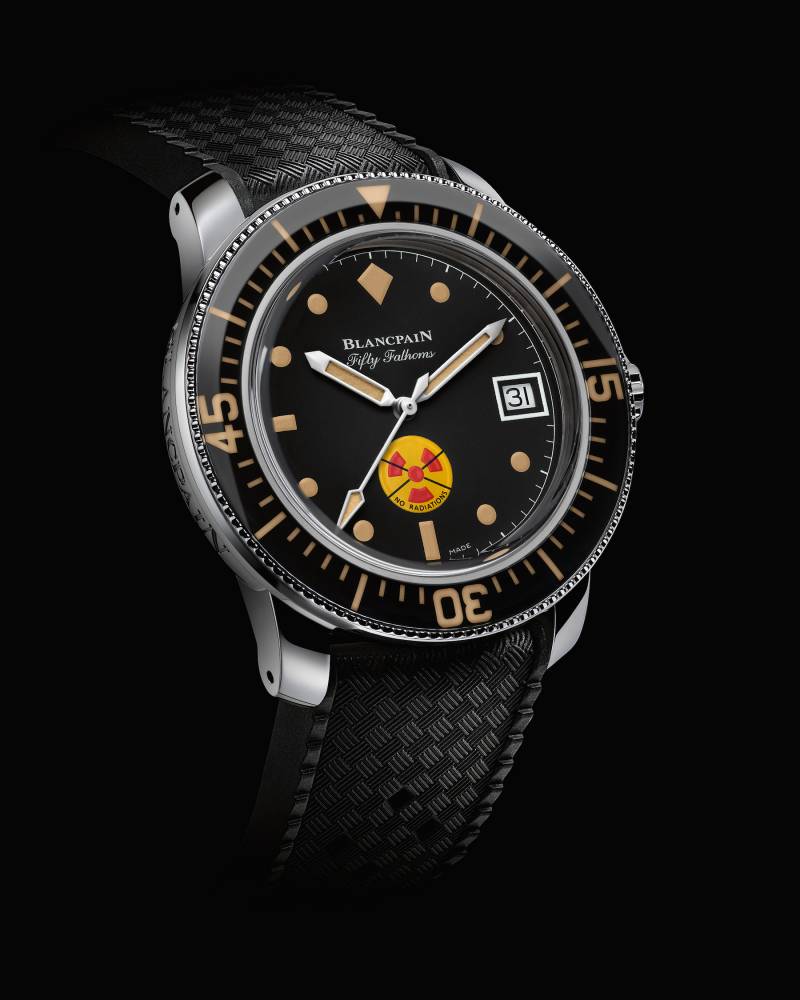 Its case is now water-resistant to 300 meters and has a diameter of 40.3 mm. Equipped with an automatic movement, the Blancpain caliber 1151 that offers up to four days of power reserve. “The two barrels are wound by a rotor with a cartridge-shaped opening, a nod to some of the collection’s historic timepieces, including the very first Fifty Fathoms. This detail, which is now atypical, was once used to soften the oscillating weight in order to preserve the movement in the event of a shock,” add its designers.

This re-edition of a Fifty Fathoms collector’s item from the Blancpain watchmaking house, is available on request via the Blancpain website, in a very limited edition for a price of 13,180€.

Read also >  A BRIEF HISTORY OF LUXURY: THE ASSASSINATION OF MAURIZIO GUCCI

History: a look back at the creation of the first Volkswagen!