On August 4, 1821, the famous  trunk maker Louis Vuitton was born, and today he celebrates his 200th birthday. This is an opportunity to look back at the five key dates that marked the history of the founder of the monogrammed brand.

Louis Vuitton was born in a small village in the Jura region of France on August 4, 1821. Born to a carpenter father, the young Louis quickly acquired a taste for tools and manual labor. In 1837, at the age of 16, Louis Vuitton left his native town to settle in Paris. He went there on foot.

He started in the capital as an apprentice in a trunk maker’s shop, where he made travel trunks for wealthy customers. He quickly showed a particular skill and talent, and orders from important clients were entrusted to him. In 1852, Louis Vuitton, then 31 years old, personally designed the toiletries for a trip by Empress Eugenie.

With the arrival of the steam engine, the industrial revolution shook up 18th century society. The various means of transportation metamorphosed before Louis‘ eyes, who was still an apprentice trunk-maker. International travel was now open to the wealthiest families, and Louis Vuitton had a vision: “we must create innovative and high quality luggage: luxury, functionality, innovation“.

1854: Foundation of the House of Louis Vuitton

Louis Vuitton married Clémence-Émilie Parriaux in April 1854 and decided that same year to found his brand, Louis Vuitton, and open his first boutique at 4 rue Neuve-des-Capucines in Paris, near the historic Place Vendôme. On the front of the shop it says: “Louis Vuitton, Malletier à Paris, maison fondée en 1854“.

With the boom in international tourism and the increase in the number of travelers, Louis Vuitton was convinced that bulging trunks were not an optimal solution and that they were unsuitable for stacking luggage. He then unveiled a high-quality flat trunk, more practical than traditional trunks.

1859: The workshop in Asnières, the cradle of the company

The success is dazzling. The practicality and luxurious aesthetics of the trunks quickly attracted a large public, and Louis Vuitton transferred his team of twenty employees to the city of Asnières-sur-Seine, a city bordered by the Seine River, which allowed the company to take advantage of river transportation. 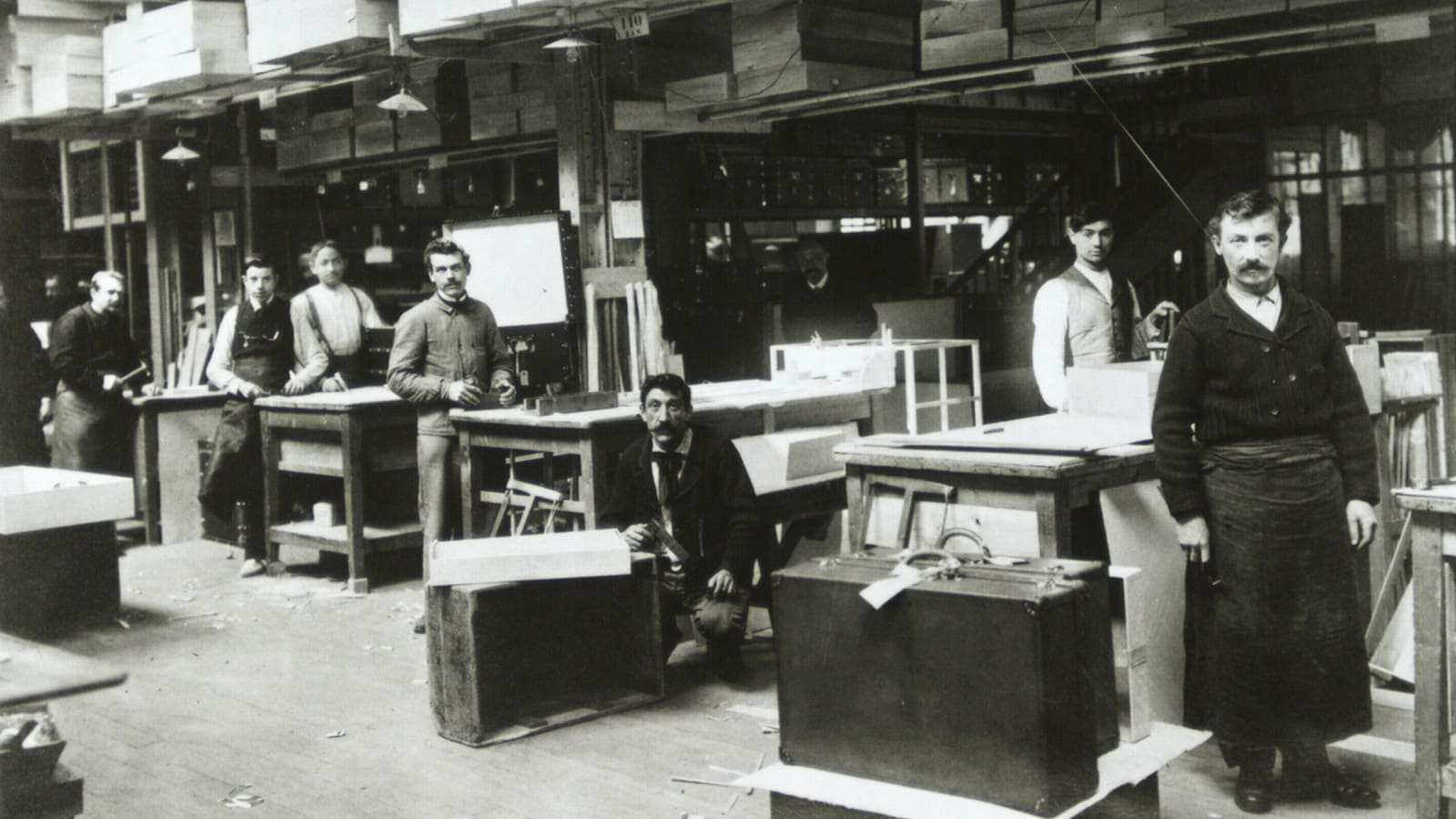 Louis Vuitton moved in with his wife a few steps from his workshop. The place where the house was built is now the Louis Vuitton museum. At the end of 1869, the Suez Canal was inaugurated and allowed Louis Vuitton to attract rich foreign clients from all over the Orient, eager to discover French luxury.

In the 1870s, the founder of the house was joined by his son, George Vuitton. This son gave Louis Vuitton the ambition to expand internationally. Louis Vuitton decided to follow his son’s advice and opened his first store abroad.

To expand his activities, he chose London and in 1885, he opened his first store outside of France, on Oxford Street in the English capital. Following the success of this opening, the trunk-maker moved to New York and, a little later, to Philadelphia.

1886: George Vuitton invents the lock that cannot be picked.

The following year, George Vuitton, the founder’s son, was also confronted with a problem in the world of tourism: locks. Not strong enough, easy to pick, the locks on travel luggage were becoming a real burden for travelers. Faced with the concerns of the clientele of his time, George Vuitton also had a vision.

Thus, in 1886, George Vuitton invented the first non-pickable lock. He set up an ingenious locking system, impossible to circumvent, and father and son joined forces to design the tumbler lock. The lock, equipped with two spring loops, was then unprecedented and George filed a patent for his invention.

To prove the strength of his tumbler lock, George Vuitton challenged the magician Harry Houdini to try to force the lock from a box closed with a Louis Vuitton lock. Faced with the ingenious system designed by George, Harry Houdini failed and admitted defeat. Today, this lock is still widely used.

Louis Vuitton died in Asnières-sur-Seine on February 27, 1892. He bequeathed to his son, George Vuitton, the reins of his empire, which he managed with the same passion as his father. In 1896, George created the famous Monogram LV canvas, which quickly became emblematic of the brand. This Monogram marks the first time a brand has been so prominently displayed on one of these pieces.

In 1987, the listed holding company, Louis Vuitton SA, merged with Moët Hennessy and became the LVMH group. In 1989, businessman Bernard Arnault took over the management of the LVMH group, and consequently, the activities of the French house Louis Vuitton. Today, as this year marks the 200th anniversary of the birth of the founder of Louis Vuitton, the LVMH group is the undisputed world leader in the luxury market.